In taking my usual summer holiday in rural New Zealand this year, I noticed that over the past year, certain ‘noxious weeds’ seem to have grown more prolific.
While perhaps I shouldn’t focus on such observations when I’m meant to be resting and indulging in leisure pursuits, I’m frequently alarmed at the disconnect between people and plants in their environment. This is especially obvious at this time of year, for two highly medicinal particular species, Chinese Privet (Ligustrum lucidum) and Japanese Honeysuckle (Lonicera japonica).

In January and February the distinctive creamy-white flowers of Chinese Privet trees make their presence obvious in many towns and rural locations and increasingly in areas of native bush. While the flowers are attractive and from a distance somewhat similar to the European Elder (Sambucus nigra), the berries produced are a delicacy to birds, who have successfully spread it throughout the land to make it the most noxious tree in the country. Similarly the smaller but scented flowers of the vigorous climber Japanese Honeysuckle, which open white then turn lemon-yellow, draw my attention to how successful this plant has been in establishing itself in more rural, native bush and farm environments.

Our avian relatives seem to have more incentives than simply having a feed for finding the berries and seeds of these two plants so desirable, as in traditional Chinese and Asian medicine both plants have been common medicines for centuries.

A recent study found that unripe fruit from Japanese honeysuckle has strong antioxidant properties which contribute to animal health(1). Another study found that extracts improved age-related physiological functions and extended the life expectancy of worms by 22%(2).

Bacteriostatic (antibacterial) effects have been shown against Staphylococcus aureus and Escherichia coli for an ethanolic extract of Japanese honeysuckle leaves(3). In mice with sepsis (a serious bacterial infection of the blood), an ethanol extract of Japanese honeysuckle flower buds enhanced bacterial clearance, reduced the level of sepsis and risk of multiple organ failure, resulting in a lower rate of sepsis-induced mortality (4). This suggests potential applications as a good adjunct with or alternative to antibiotics. With growing concerns around antibiotic resistance, these findings should enhance our interest in this plant, now endemic throughout New Zealand.

Diabetes is another traditional use of Japanese honeysuckle, and researchers in Taiwan have found an ethanol extract of flowering aerial parts to reduce diabetic nephropathy in rats. Japanese honeysuckle treatment to diabetic rats for 8 weeks reversed three key abnormalities associated with renal dysfunction – including reduced creatinine clearance, increased blood urea and proteinuria, and an elevated ratio of kidney weight to body weight(5).

Anti neurodegenerative compounds with monoamine oxidase B receptor affinity (identified as isochlorogenic acid A and isochlorogenic acid), have also recently been detected in Japanese honeysuckle flowers(6). In Korean traditional medicine this plant has been used for cancer management, and anticancer activities on human lung cancer cells have recently been documented for polyphenol compounds extracted from it(7).

I’ve discussed the many medicinal benefits of Chinese Privet fruits in my March 2016 blog, particularly in relation to their potential prophylactic and treatment benefits for degenerative bone and joint conditions such as osteoporosis and arthritis(8). Again, a great deal of research has validated these and other therapeutic actions. Other recent findings include possible benefits of a combination of Chinese Privet and Siberian ginseng (Eleutherococcus (Acanthopanax) senticosus), to protect against bone marrow suppression induced by chemotherapy in mice(9). Inhibitory effects against the influenza A virus have also been reported for secoiridoid components of Privet fruits(10), and compounds with neuraminidase inhibitory activity (a key mechanism of action of anti-influenza drugs), have been isolated from its leaves(11).

Knowledge of these many useful potential medicinal applications for these two plants, should be of great interest both to those wanting cost-effective local solutions to increasing health concerns, as well as those concerned at the damaging effects that they are starting to have as invasive species, on our ecosystem and native species habitats.
The effect of invasive plants on natural ecosystems can be disastrous, firstly for the competition with indigenous species, and secondly, because they limit the stability and availability of natural resources to the whole native species community. They constitute a global environmental, economic, and social change driver as they can dramatically alter the composition of ecosystems and lead to losses in biodiversity, agriculture productivity, and human health. These negative effects of invasive plant species are likely to be exacerbated by climate change, which will foster their further spread especially in valuable fertile areas.
Identifying innovative ways for communities to transform invasive plants from ‘problems to resources’, represents an important challenge for modern societies and policy makers. Bioprospecting and investigating both Lonicera japonica and Ligustrum lucidum to identify and develop new phytomedicines and compounds to promote human health in the future, is surely worth further exploration and research. 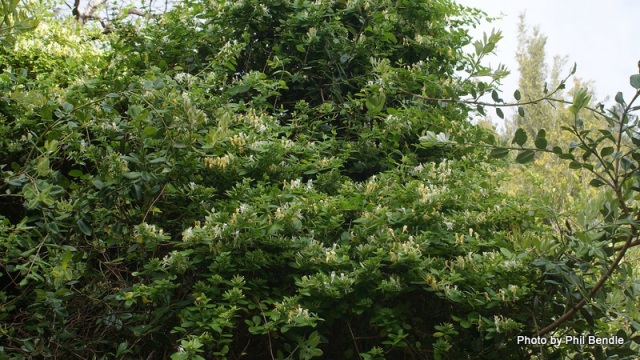