Human sexual responses and functions are highly complex, with sexual desire and activities being influenced by multiple psychological, physical, environmental and relationship factors.

Development of drugs such as sildenafil and others has made a big difference to the sex lives of men with erectile dysfunction over the past 15 years, but until now few drug treatment options exist for the most common sexual complaint in women, decreased sexual desire. 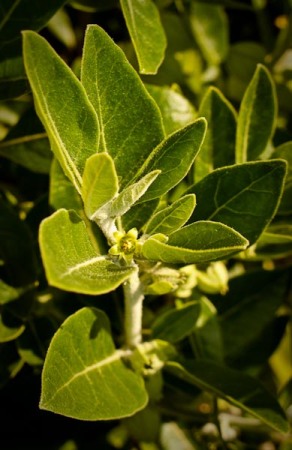 Ashwagandha (Withania somnifera) is a herb native to India and the Asian subcontinent, used as a tonic and treatment for a wide range of health conditions and perceived benefits. Known among herbalists as an ‘adaptogen’, its best known action is to help improve the body’s resilience to stress. Withania normalises blood levels of cortisol and other adrenal hormones during chronic stress, and exhibits a large number of actions suggesting an ability to insulate against adverse environmental stressors. This results in reduced anxiety, and a subtle but welcome retention of a sense of still being ‘in control’, during times of stress (2,3).

Withania is also used traditionally to treat men with erectile dysfunction and performance anxiety, and clinical studies have found improvement in sperm concentration and motility(4-6).  This reputation extends also to helping address diminished sexual desire in women, particularly where a depleted nervous system is contributory. A clinical study recently conducted in India, provides compelling data suggesting that it may well assist some women to achieve enhanced sexual satisfaction(8).

The study involved 50 women aged 21–50, all of who were in steady heterosexual relationships, and previously or presently engaged in sexual function for several years. Most were married women from affluent households who were not employed, but reported as having stressful lives due to social demands, child rearing, and husbands’ high expectations.

The women were divided into two groups, and both went through a counselling program consisting of two seminar presentations and an individualized consulting session on addressing FSD. One group also consumed capsules containing a 300mg extract of Withania (standardised to contain not less than 5% withanolides), and the other group placebo capsules, twice daily for 8 weeks.

The primary outcome measure was the Female Sexual Function Index (FSFI), a self-report 19-item questionnaire which was used at the beginning of the study, then at 4 and 8 weeks later(7). This included domain scores for desire, arousal, lubrication, orgasm, satisfaction, and pain. The FSFI Total Score was a weighted sum of these, and as expected was low at the study’s commencement.

Withania treatment lead to a significantly higher improvement than placebo in the FSFI, at both 4 and 8 weeks after starting the study. This increased from 13.63 to 23.86 in the treatment group, but only from 13.57 to 20.06 in the placebo group, a statistically significant difference. While mean scores for sexual desire or the number of total sexual encounters were similar in both Withania and placebo groups, mean scores for lubrication and orgasm were higher in Withania treated rather than placebo treated women. Women in the Withania treated group also reported a marked improvement in sexual satisfaction scores at 8 weeks, these increasing 1.4 points (from 2.35 to 3.79), versus only 0.36 points (from 2.34 to only 2.7) in the group of women who received counselling only (8).

Results from this study don’t suggest that Withania is an aphrodisiac, as Withania supplementation failed to statistically improve sexual desire or the number of total sexual encounters. However, the fact that Withania caused a marked increase in overall sexual satisfaction, in what was a relatively small clinical trial, offers considerable promise for women seeking a natural and safe herbal option for what is increasingly being recognised as a relatively common complaint in our modern world.