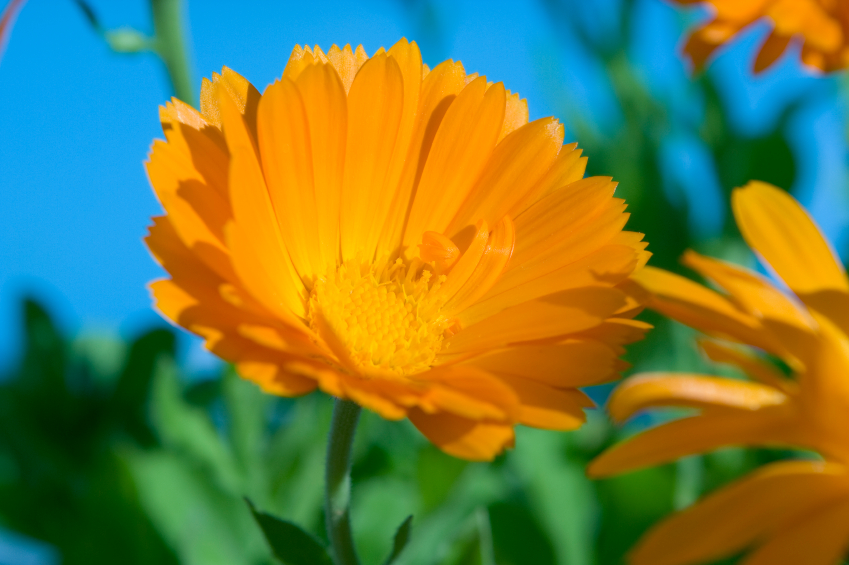 Preparations made from flowers of the English or Pot Marigold (Calendula officinalis), a well-known garden plant, are widely recommended and used by western medical herbalists for minor cuts, grazes, and slow healing wounds, where an antiseptic and healing action is required. The European Medicines Agency has also approved Calendula as a traditional medicinal product for the treatment of minor skin inflammation, and as an aid in the healing of minor wounds.

However, apart from two clinical trials showing benefits from a Calendula ointment to treat dermatitis secondary to radiotherapy treatment in cancer patients (1, 2), few human clinical trials have been published.

Brazilian researchers recently conducted a clinical trial to evaluate the effectiveness of Calendula extract in the treatment of non-healing venous leg ulcers (3). Treatment consisted of a twice daily spray application of a hydro glycolic extract of Calendula, or the standard hospital procedure which included the use of collagenase, the antibiotic chloramphenicol, and 1% silver sulfadiazine cream. Both treatments were given for a period of 30 weeks or until ulcers healed, and nursing staff examined and assessed patients every two weeks, during which the wound area was measured and clinically evaluated.

Swabs were collected from the wounds before starting treatment, and these showed Staphylococcus aureus to be the predominant microorganism in both the control and Calendula groups, with Pseudomonas spp., Klebsiella spp., and Escherichia coli being found in the wounds of some patients. The size and duration of ulcers prior to treatment was similar in both groups, and patients had an average age of 68 years in the control group of 19 patients, and 63 in the Calendula treated group of 38 patients.

Favourable outcomes were also achieved in a Serbian clinical trial which involved 21 venous ulcer patients who applied Calendula ointment twice daily for 3 weeks (4). Calendula treatment reduced the total surface of the ulcers by an average of 41.7%, but only by 14.5% in the control group of 13 patients treated with saline dressings. Complete wound closure was achieved in four patients treated with Calendula.

These two studies show a significant acceleration of chronic venous ulcer wound healing through twice daily application of topical products made using Calendula flowers. While a 3 week treatment period was beneficial, continuing this for longer periods is recommended to achieve optimal results.

Beneficial effects of Calendula cream for the treatment of vaginal Candidiasis (thrush), were also reported from a recent Iranian study involving 150 women aged 18-45 years(5). Participants used a 5-g vaginal applicator of Calendula or clotrimazole (an antifungal drug) cream for seven nights before going to bed, then were assessed at two post treatment time points.

Compared to the clotrimazole group, fewer women in the Calendula group tested negative for Candidiasis at 10–15 days following treatment (49% vs 74%), although both treatments had similar effects at improving clinical signs and symptoms and sexual function. At a 30-35 day post treatment follow up, however, signs and symptoms were less severe in the Calendula treated group, and women treated with Calendula were significantly less likely to have suffered a recurrence of Candidiasis, than those treated with clotrimazole.

These results suggest that a seven day course of intravaginal calendula cream is safe and can be effective for the treatment of vaginal Candidiasis, but seems to have a delayed effect compared to clotrimazole. However, Calendula use may have better long term outcomes such as a lower risk of recurring infections, even after a 7 day course.

While a longer duration of Calendula use may have greater effectiveness in the treatment of vaginal Candidiasis, particularly as resistance is increasing to clotrimazole and other antifungal drugs, this trial provides encouraging data to support its use for this annoying problem experienced by a large number of women.

Clearly the impressive healing capabilities held by the attractive and bee-loving flowers of this easy to grow plant, extend beyond minor cuts and grazes, to include more chronic and debilitating conditions such as venous ulcers and vaginal thrush.